CASH REMITTANCES sent by Filipino workers abroad declined in August after two straight months of recovery, as inflows from the Middle East and Japan fell amid the coronavirus pandemic.

Money sent home by overseas Filipino workers (OFWs) through banks stood at $2.483 billion in August, 4.1% lower year on year, according to data released by the Bangko Sentral ng Pilipinas (BSP) on Thursday.

“By country source, the decline in remittances in August 2020 compared to the level in the same month last year was noted from Saudi Arabia, Japan and the United Arab Emirates,” the BSP said.

However, this was partly offset by an “observed remittance growth” from the United States, Singapore, and Malaysia.

The top source of remittances during the eight-month period is the United States, where 40.2% of the inflows were sourced. It was followed by Singapore, the United Kingdom, Japan, Saudi Arabia, United Arab Emirates, Canada, Hong Kong, Taiwan, and Qatar. All together, remittances from these countries accounted for 78.9% of the total.

Meanwhile, personal remittances, which include inflows in kind, stood at $2.756 billion in August, down by 4.2% from the $2.875 billion logged a year ago.

Cash remittances have posted year-on-year growth in June and July, fueling hopes that the worst is over for remittances that support the country’s consumption-driven economy. In May, remittances plunged 19.2%, reflecting the impact of widespread lockdowns around the world.

The August remittance figures reflect the impact of the continued repatriation of OFWs amid the crisis, said Asian Institute of Management Economist John Paolo R. Rivera.

“Although the Philippines has also been deploying OFWs abroad in the midst of the pandemic, the returning OFWs are still greater than deployed OFWs,” Mr. Rivera said in an e-mail.

More than 213,000 OFWs have been repatriated as of Oct. 11, according to the Department of Foreign Affairs. The numbers are expected to reach 300,000 by December.

The International Monetary Fund had earlier warned that migrant workers may not be able to sustain giving support to families back home through their savings if the recession deepens in host countries.

“It [August inflows] does confirm that the June-July recovery combo may be because of the household requirements for schooling, such as tuition fees, tech upgrade, etc.,” Mr. Asuncion said in an e-mail.

Mr. Asuncion said he expects remittances in the next few months to remain soft, with an “inflows bonanza” by December due to the holidays.

“The trend is becoming unusually unpredictable. Christmas is coming so we expect a surge in remittances in the coming months, by virtue of altruism as motivation for remittances,” Mr. Rivera said.

The BSP expects cash remittances to fall by 2% this year amid the pandemic crisis. 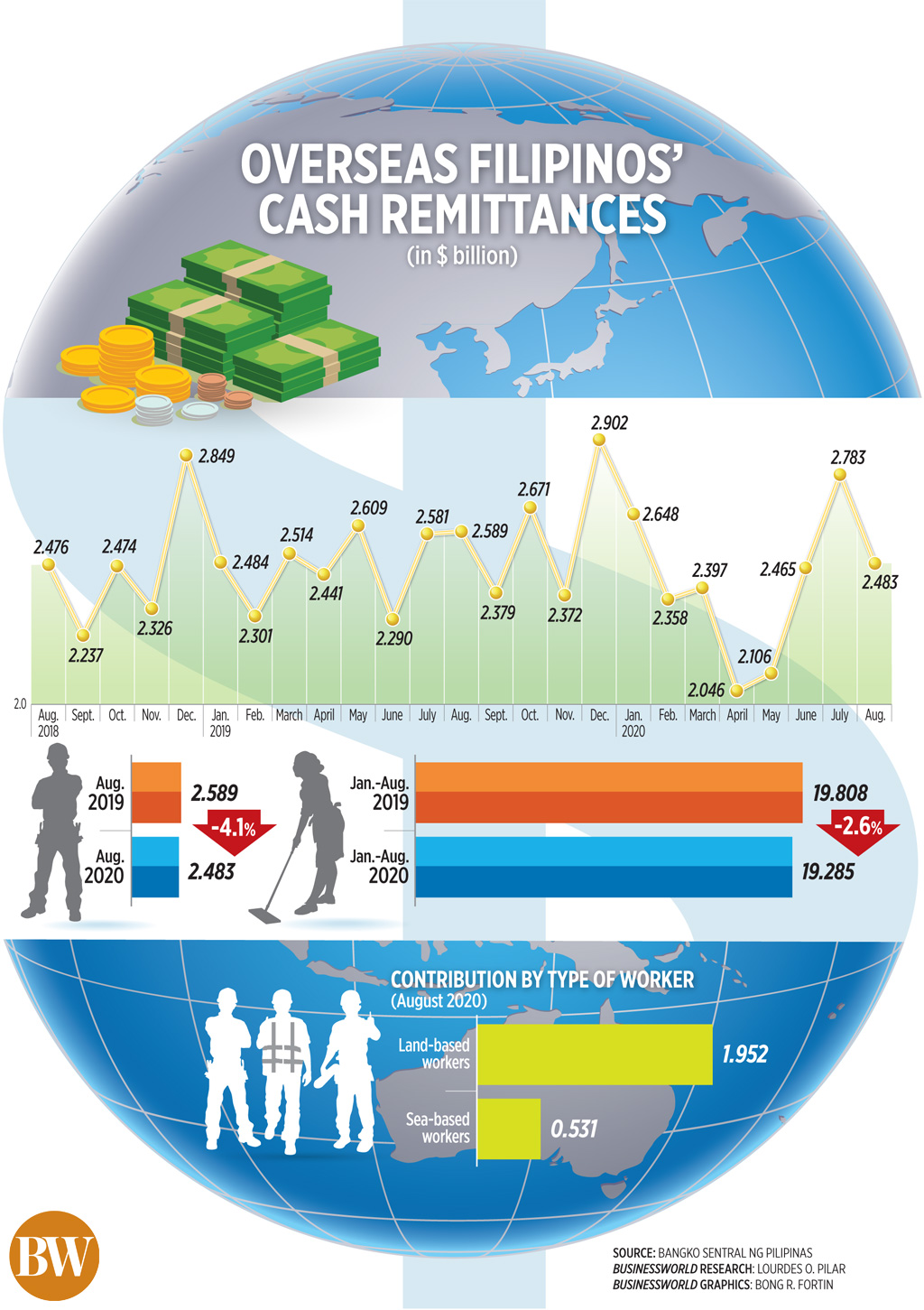